For a dragon to gain accuracy in the fine art of breathing fire, they need to practice, right? Let's build out a feature where targets randomly spawn for our fireballs to collide with. We'll keep track of how many targets we've hit and use that as the main scoring component of our game.

First, let's download the target sprite and put it in mygame/sprites/target.png:

We'll keep track of the targets in an array, just like fireballs, so that we can more easily manage them throughout our game loop. Instead of initializing our targets as an empty array, let's start by displaying three of them:

We need to render our target sprites too, so include those in the array we push into args.outputs.sprites:

Similar to how we represent the player and fireball sprites, the targets have x and y coordinates for position, width and height for size, and an image file to represent the sprite. We create three items in our args.state.targets array, which then displays three different targets. 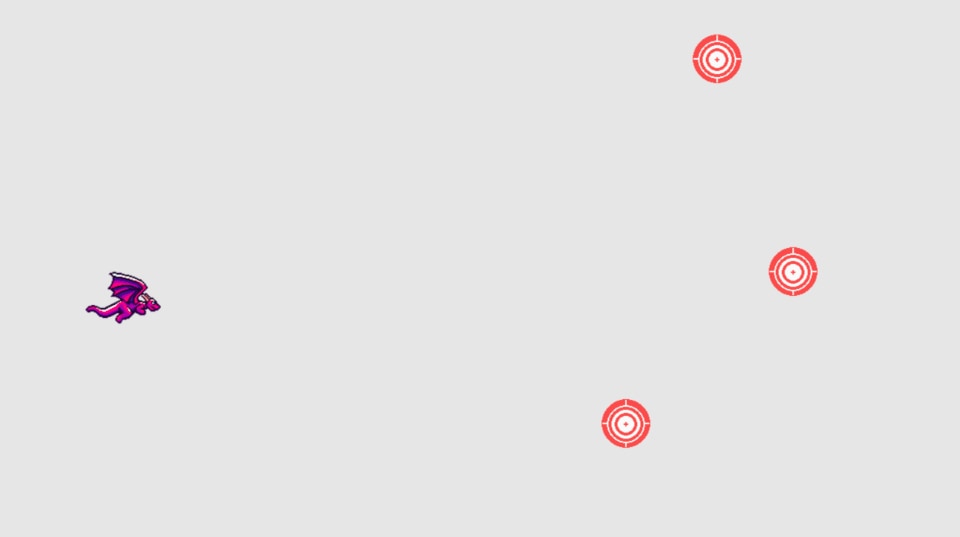 Try changing the x and y positions of our three targets. Weird. They don't change their position...

If you quit your game and relaunch dragonruby, they will though. Why is that?

Well, when DragonRuby loads our game code, if any value is set in args.state via ||=, it won't reassign the new value because that value is already set. args.state.targets already has three targets in it, so when our code is reloaded, it doesn't know to discard our old targets.

Let's instruct DragonRuby to reset our state when the game runs by adding the special $gtk.reset after the end of #tick:

Now if we change the coordinates of our target, the game reloads our code and they change their position. This is a really awesome aspect of DragonRuby. We can easily adjust and modify the running game without having to restart the engine.

There's something that's a bit of a bummer about our target array code. We duplicate a lot of values by having to specify the width, height, and image path. It'd be a bit annoying to have to change it in all those places even though we want them to be the same. Let's introduce a method to make this code better. Methods are great for encapsulating a specific action. In our case, let's define a method that creates a target at a given x and y position.

Within mygame/app/main.rb we can define methods that are able to be called in #tick and our other code. Our new spawn_target method takes two parameters, the x and the y position, and then uses those parameters to return a hash representing the new target. In Ruby, method parameters are separated by commas. We pass parameters into methods that we want to have access to within that code. Because the width, height, and image don't change for a given target, those values stay the same and aren't passed in as parameters.

Then when we lazily assign args.state.targets ||=, we call the method three times, passing in the coordinates we want the target to spawn at.

#spawn_target is a simple method, but we'll begin to see how we can expand upon the methods we write to make our code easy to understand while it gets more complex.

The fireballs our dragon spits just fly behind our targets and off the screen into infinity. Let's make it so that if a fireball hits a target, something happens. Eventually, we'll want to play a sound, remove the target, and even play an animation. But humble beginnings, humble beginnings.

Collision detection is when one object overlaps with another object in our game. Because we're manufacturing the space the game exists in, there's no physics like we have in real life. We need to simulate that by checking to see if two objects are attempting to exist at the same point and react accordingly. 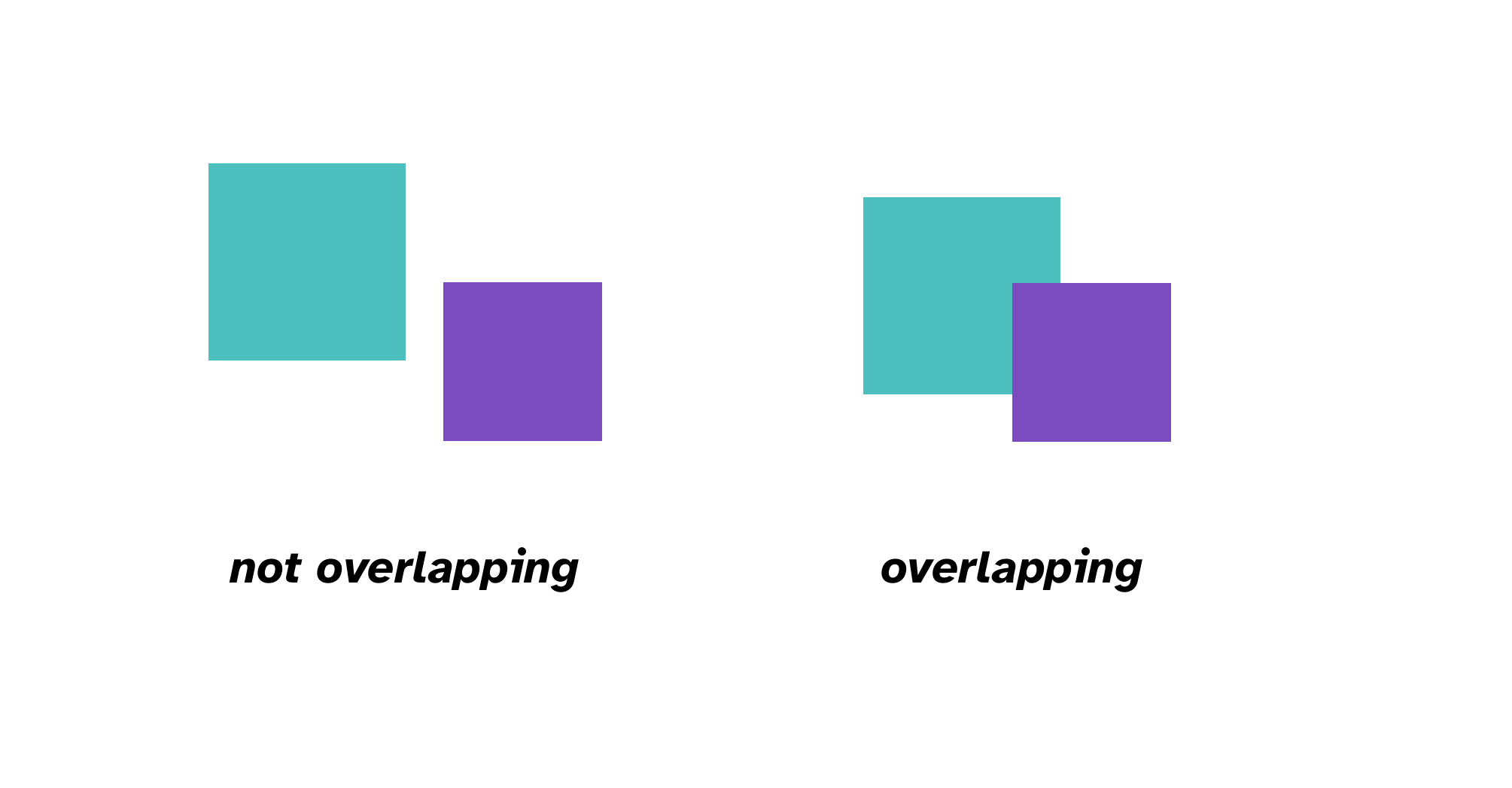 We could employ trigonometry to determine if a given point in one shape overlaps with another, but DragonRuby gives us a helpful method to handle this for us: args.geometry.intersect_rect? rect_1, rect_2

It may seem odd that we're checking the intersection of two rectangles when our target is a circle and our fireball is almost a circle. Most 2D games use rectangles for their collision detection for the simplicity of it. Our images are already rectangles, and it's close enough for our purposes.

Here's the written out logic behind the collision detection we'll implement:

Play the game and hit some targets. Nothing visually happens (yet), but if you check the console (~), you'll see that "fireball hit target" was output multiple times.

With a loop and a method, we've implemented collision detection. That wasn't too bad, was it?

But... It's not very helpful to output a message to the console when a target is hit. Let's instead remove the target so that it is no longer displayed. We'll need to remove the hit target from the array of targets so that it's no longer checked against.

We'll go about this in the following way:

Ruby makes that pretty easy. All you do is call the #reject! method on an array and pass in the logic for when an item should be removed. If you have an array of numbers and call reject on all of the numbers, only the odd ones will remain in the array:

In the code above, n is the argument passed into the block, which represents a given number in the array. #reject! loops through each element in the array, checking each element against the code we've written.

So in our collision detection code where we call puts, we'll instead mark the target and fireball as dead and then reject the dead ones from their collections:

Since the target and fireball that collided are no longer being tracked in args.state, they don't get rendered on the screen and are, for all intents and purposes, gone! We then #reject! each fireball and target that is dead.

This almost feels like a game. That's a great feeling. We're getting close to fun.

Shooting three targets and having them disappear doesn't make for much fun though. After the three targets are hit, it's just your dragon floating in the sky with not much else to do. We're back to chapter 3! Ugh, chapter 3 was so boring! I can't believe we ever even made anything that boring before. (But remember how cool it was when we got the fireballs working? That was cool! It's funny how a game evolves and what it used to be, seems so basic compared to where we're at now.)

Remember back in the day, way back when, like a few sections ago, when we introduced #spawn_target? It was helpful then, but now it's going to be even more helpful. We'll call it every time we destroy a target so that a new one spawns. We'll be able to play Target Practice forever!

But calling #spawn_target with the same x and y over and over isn't a lot of fun. So let's make a few related changes where we'll do the following:

Spawn at a random location

#spawn_target looks a little different now. We no longer pass in the coordinates as arguments because we'll randomly generate the position. We instead pass in args from DragonRuby's #tick so that we can get the width and height of the screen to use to determine boundaries.

We create a size variable to store the width and height of the sprite to use in our formulas for spawning the target. We don't want to have to type 64 over and over because it loses its meaning and gets difficult to change.

Then we apply some math. Don't let math scare you away from programming! We'll keep it simple and the toolbox you need is relatively small. Plus, the math will help make our game even better. Games make math fun.

rand is a method that we get from DragonRuby that's available everywhere. rand without any parameter generates a random real number between 0 and 1. That's not really useful for us right now, so we can instead pass in a parameter that sets the upper boundary of the random number. rand(100) generates a random integer from 0 up to 100 (not including 100).

So for the x position of the target, we generate a random number that's up to two-fifths the width of the game screen and then we add three-fifths of the width to that number so that the targets spawn on the far right side of the screen. We don't want to spawn targets too close to the player, otherwise our game will be too easy.

For the y position, we generate a random y position based on the height of the game, but we subtract twice the size of the target sprite and then add one of its sizes back to the random number to give the spawn area a gutter. This prevents the target from spawning partially off the screen, which would make it impossible to hit.

Instead of passing in the x and y position, we just call #spawn_target with DragonRuby's args so that we have access to the grid in our method. This gives us three randomly located targets.

Spawn a new target when one is hit

We loop through the fireballs and move each one, just as before. And then we check to see if it intersects with any of the targets. If they do intersect, we mark both the fireball and the target as being hit.

The one new line is where we push a new target into args.state.targets from #spawn_target. That'll make a new target appear in a random location whenever we hit another.

Play the game a bit and see how feels. Is there anything that can be adjusted or improved? What if you adjust the formula for #spawn_target? How does that feel with targets spawning close or further away?

Let's keep track of how many targets we've destroyed before we call it a chapter.

The approach for this is pretty simple. We'll store a number in args.state.score and increase it each time we hit a target. Then we'll display that number on the screen as a label.

Near the top of #tick, lazily initialize args.state.score to 0.

In our collision detection loop, when we hit the target and fireball, add 1 to our score:

Finally, display our score as a label in the upper-left area of the screen:

This approach to displaying a label is different than previous chapters. Instead of using an array to represent the properties of the label, we're now using a hash like we do for sprites (for similar reasons: it's easier to remember and more clear). Setting x, y, and text should be familiar by this point. But size_enum is new. It's a way to specify how large the text is. It takes whatever value we set and adds that much to the default text size. Increase it from 4 to 40 or -3 and see what you like best.

What a chapter! We displayed targets, handled collision detection, spawned our targets randomly, and added score tracking. We've come a long way in this chapter. And added a lot of core concepts that are found in most games. Review the code to make sure you understand it.

We'll take a brief side quest where we ask some big existential questions and clean up our fireballs that have flown off the screen before we turn this project we've been working on into a game that we can play and finish.