Our next mission is to make our dragon spit fire because that's just what they do. We'll piece this whole thing into a game soon enough. But let's keep focusing on simple mechanics and the code for right now.

In the last chapter, we used args.inputs to check for player input from the four main directions. If those inputs are pressed, then we move the dragon. Now let's check to see if the Z key is pressed to know when to have our dragon spit a fireball.

Using puts is a really helpful way to check that our game works as we expect it to. In this case, every tick where the Z key is pressed down, it prints the string "Z key pressed" to the console (open it with ~, remember?). Run your game and press the Z key a bunch and then open your console.

When making a game, it's important to support a variety of input configurations to make the game as accessible as possible. Sure, the keyboard arrow keys and the Z key are sensible defaults. But what if our player wants to use a gamepad controller? Or what if they would prefer to use WASD for movement? From the start of coding player input, let's support as many different inputs as reasonably possible.

DragonRuby GTK is a big help in this department. Our code earlier that checks args.inputs.up (down/left/right) already checks for the arrow keys, WASD, and gamepad input. Slick! We don't have to change anything there. But let's go ahead and update our logic check for firing the fireball to check all of the possible inputs.

We learned about ||= earlier, and that's a combination of two separate operators in Ruby. || represents "or" and = says to assign a value. If the value on the left doesn't have a value, assign it the value on the right. We can make use of the "or" (||) operator independently of the assignment operator (=) to control the logic within our game.

You can combine || on one line (if monday || tuesday || wednesday), but it can be helpful to break long lines to make our code easier to read.

Outputting info to the console isn't that helpful for the player, but can you begin to imagine how we'll use that check to instead spit a fireball?

We want to display a fireball on the screen when the action key is pressed. We've got most of the code, all we need to do is change puts to instead display the fireball.

At the top of #tick, assign an empty array to args.state.fireballs if nothing has been assigned yet. This will let us keep track of fireballs across the game loop to do all sorts of things with them (display them, move them, collide them with other objects):

Then where we check for the action input, push a fireball into the arg.state.fireballs array based on the current player's x and y position:

All we have to do is render our fireballs by pushing them into the args.outputs.labels collection. DragonRuby is smart enough to know that if we push an array into any args.outputs collection it'll flatten it and display them correctly. Thanks, DragonRuby!

We've been using arrays to represent the fields for different data in our game like labels and sprites, but arrays have other uses too. Arrays are a great way to keep track of information that we need in a list. The array we've created in the code above tracks our fireballs.

Play your game and see what happens! Fireballs everywhere. Wait! You're not impressed by those fireballs? I'd be pretty frightened if the word "fireball" was flying at me. 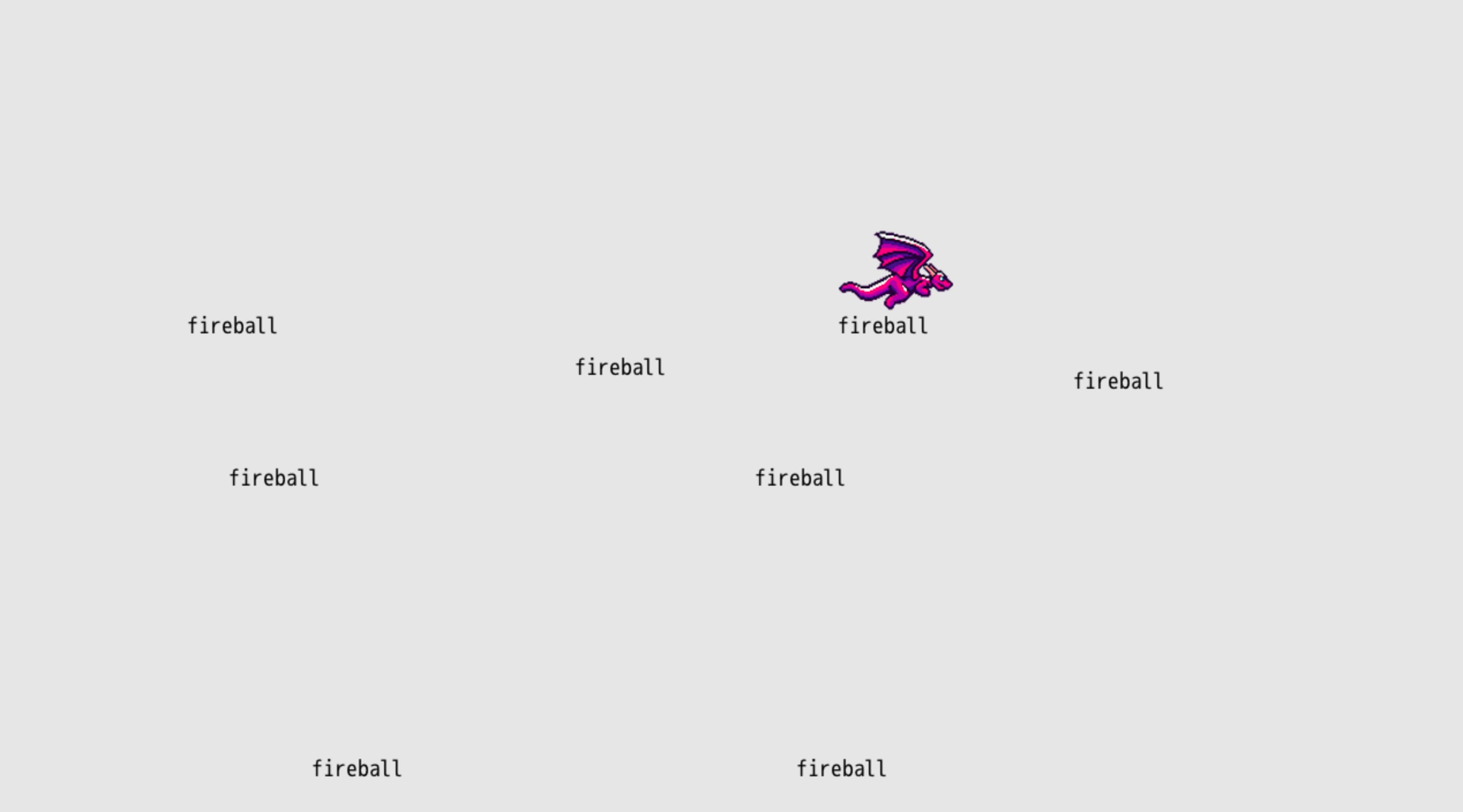 Wait, where are you going? Why are you muttering "I didn't sign up to read no stinkin' book where you output the word 'fireball' on the screen, I'm here for the real flame, the good stuff..."

Guess what? We're sticking with ole "fireball" for now! It's silly and fun and I haven't found a good fireball sprite to use. We'll get there, we'll get there. But let's first make the fireballs move across the screen.

When we moved our player dragon, we took the x and y position and added or subtracted values in each #tick based on if any directional input was pressed. Our fireballs will move regardless of any button pressed once they're extruded from our dragon's mouth. Because our game is simple and the dragon only faces to the right, all of the fireballs will move to the right. How do we go about that on our X-Y axis? We just increase the x position of the fireball each tick. Let's do that and see what happens:

Right between where we add a new fireball to args.state.fireballs and we display them using args.outputs.labels, our new code does this:

Move your dragon around, spit some fire, and bask in the glory of a word moving so smoothly across the screen that it almost looks like a... fireball!

Try changing around speed + 2 to make the fireballs move faster or slower and see how that feels. Adjusting speed values can really change the vibe of your game and is important in tuning it to feel just right.

There are a lot of important concepts in those three newly added lines of code. In Ruby, when there's an array of data, we can loop through each item and modify their properties. Games are composed of huge collections of things: enemies, fireballs, menu options, player inventory, etc. Arrays (and just collections in general) aren't anything to be afraid of, and soon enough, you'll be naturally thinking of your game data in terms of arrays.

Looping through an array of data in each #tick and then doing something is the stuff games are made of! Here are some ways this can be applied in all sorts of games: enemy behavior, checking for collision, and animating. As our game (and any game you make) gets more complex, looping through collections of data becomes more and more common.

So far throughout the book, we've been using arrays to represent the entities in our game, whether it be the player's dragon sprite or our fireball text that gets displayed. Remember [args.state.player_x, args.state.player_y, 'fireball']? Arrays are wonderful and important, but they aren't so great for representing structured data because it's difficult to remember what each piece of data in the array's positions represents. Remembering that fireball[2] is the text value and not the y value is tricky. Luckily, DragonRuby has a more verbose and clear data structure we can use for managing our data. It's called a hash! Much like arrays, hashes are extremely useful.

Let's look at what the text example above would be like as a hash:

Hashes are expressed through curly braces {} and contain key: value pairs separated by commas. The values of a hash can be anything, from numbers to strings to whatever your heart desires. Let's say we wanted to build our own hash to represent a dragon and put it in the dragon variable:

Quick note: if you see a hash with key-value pairs that look like this: { :name => "Francis" }, don't fret! That's just another style in Ruby known as the hash rocket.

In general, differentiate between arrays and hashes like this: hashes are used to represent one piece of data with multiple properties and arrays are used to collect data (oftentimes hashes) to keep track of and manipulate them.

Below is our entire game translated to use hashes instead of arrays for our rendering:

It may not seem like much has changed, but two key changes make this worthwhile:

With that refactor done, let's display a sprite for our fireball and call it a chapter.

Download the fireball sprite below and put it in mygame/sprites/fireball.png:

I just made that! It's not half bad, right?

We'll change the hash we push into args.state.fireballs to be a sprite and adjust how we render that collection. Nothing too major. Here are the changes near the bottom of #tick that you'll need to make:

We adjust the starting place of the fireball sprite to look like it comes out of the dragon's mouth. The sprite is 32 pixels wide by 32 pixels tall, so we set that.

Now that the fireball is a sprite and not a text label, we can push both the player and the array of fireballs into args.outputs.sprites in one go. This is more efficient for DragonRuby than doing it separately. 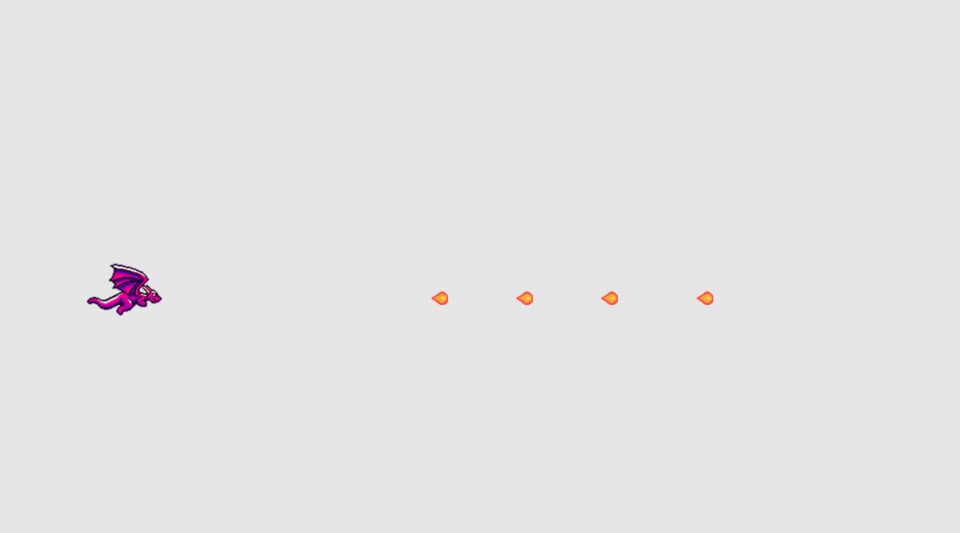 We're so close to having a game, so close! We just need something to spit fireballs at, right? In the next chapter, we'll display some floating targets that get destroyed when a fireball hits one.